Life and Story of Jhulelal

The region around the banks of river Sindhu was rich in cultural values and heritage. Ancient sages had greatly contributed to it. It was not only prosperous in terms of wealth but also rich in spiritual values. The people, in general, were peaceful and happy. This attracted many foreigners. Greed and aggrandisement soon entered Sindh. Many Hindu Sindhis were converted. One of the provinces called Thatta was overtaken by Mirkshah, who was a personification of fanaticism and tyranny. He was advised by his courtiers to use his power to convert peace-loving people to his religion. This is the way to Jannat, Paradise they advocated. To obtain pleasures and joys of Jannat, Mirkshah released “Shaahi Farmaan” majestic order: “Either give up your religion or prepare to die.” This was a grave blow to Hindus. They were overtaken by grief. Yet, they discoursed among themselves and their Mukhi, leader appealed to Mirkshah. For some grace time, to decide upon a course of action. Mirkshah acceded.

The Hindus recalled the assurance of the Lord in the Bhagavad Gita. That God descends on earth when unrighteousness overtakes righteousness. He comes to protect his devotees from the wicked. So, they approached their Varuna devata, water-God. Hindu Sindhis have been worshipping their very own river as a representative of the supreme God for thousands of years. It is believed that all of them spent forty days and nights on the banks of river Sindhu, praying to God. During these forty days, they did not shave nor wear new clothes or shoes. They however managed with their old clothes by washing them again and again. All activities during this period were done as an oblation to God. At the end of forty days they heard a voice from the skies, a revelation, “Despair not, I am coming. I shall take birth from the womb of Maata Devaki.” Hearing this the Hindus rejoiced and celebrated the occasion after forty days. The event is called “Chalioh” meaning fortieth day and is celebrated by followers of Jhulelal every year.

Hindus approached Mirkshah and informed him of God’s promise and sought more time. Out of curiosity Mirkshah consented, although he believed that God never descends on earth. After some time, the Hindus came to know that Maata Devaki has conceived. They all rejoiced and celebrated that day as Assu Chand (new moon day of Assu (Ashwin) month). Hindus Sindhis follow a year of twelve lunar months i.e. time taken by the moon to revolve around our planet earth. There are thus less than 365 days in twelve months hence there is an intercalary month every third year. Three months later on Pohi (Paush) Chand Hindus again prayed to Daryah Shah (water-God) reminding Him of his promise.

On the auspicious occasion of Cheti Chand (New moon day of Chaitra month i.e. first day of the first month in lunar calendar) Devaki delivered a baby boy. On this occasion dark clouds gathered in the sky and showered rains. The Hindus on earth kept rejoicing. Immediately upon the birth of the child, the parents saw in his mouth the Sindhu River flowing and an old man riding on a Pala fish upstream in a northerly direction. To perform “jado”, meaning prayer to water-God, Maata Devaki went to the banks of Sindhu River. All the Hindus celebrated the coming of the Godchild with songs and dances.

An astrologer predicted extraordinariness awaiting the child and named him “Uday Chand”. One Punjabi astrologer christened the child as “Uderolal”, Inhabitants of Nasarpur addressed him as “Amarlal”. When the child was placed in the cradle as part of the naming ceremony, the cradle started swinging on its own. Hence, they renamed him “Jhulelal” swinging child. Later on, his pet name became “Jhulan”. Soon after the birth of Uday Chand, Maata Devaki passed away. Ratanchand, father of Uday Chand remarried and Uday Chand was nursed by a step-mother.

Mirkshah received the news regarding the birth of the Godchild. His courtiers pressed him for settling the pending conversion immediately. They reminded him about Shaahi Farmaan. Gripped by fear Mirkshah ordered his minister Ahirio, to get first-hand knowledge about the situation. Ahirio carried a rose flower dipped in deadly poison and approached Ratanchand for a glimpse of the newborn. As soon as Ahirio presented that flower to the child, Uday Chand kicked it away. Ahirio got confused. He saw an old man in place of the child and then a young man. Ahirio bowed before the child and begged for mercy. He soon became a disciple of Jhulelal.

When Ahirio narrated this incident to Mirkshah, the ruler developed fear. On one side he wanted to attain the heavens without contributing much, on the other hand he was not convinced of such a method of attainment. He did not quite grasp the significance of God descending as a child. Out of fear, he dreamt that a child was strangulating him: at times an old man was confronting him with a sword. He confided about his dream to Ahirio, who advised him to lie low.

Meanwhile Ratanchand duly performed all rites and ceremonies as per the directions of priests. Tonsured the child’s head and took him to a teacher. The child was imparted worldly as well as spiritual knowledge. The child was taken to Gorakhnath who gave the child a guru–mantra, guru’s word-symbol: “Alakh-Niranjan”. Upon completion of his education, Jhulelal returned home.

Udero’s mother wanted him to earn for the family. She prepared boiled beans and asked Udero to sell them in the market. Instead, Udero went to the Sindhu banks. He distributed half the beans to people and offered the rest to the river. He then discoursed with the people around, on the spiritual wealth each one carries. In the afternoon his vessel floated to him with fine quality rice in it. Having got such rich returns for a few days, Udero’s mother turned suspicious. She directed Ratanchand to follow Udero. When Ratanchand saw the noble spirit of service and sacrifice in Udero, he too followed it in the right spirit. He started serving people without anticipating a return.

Mirkshah was getting impatient. His courtiers urged him to attain the pleasures of paradise. They also accused him of being ‘kaafir’ infidel. Unable to tolerate such taunts, he decided to meet Udero face to face. He asked a devotee of Daryashah (water-God) Ahirio, to arrange a meeting with Udero. Ahirio went to the Sindhu river and prayed for the vision of the Lord. He implored God for rescue from the onslaught of the fanatic king. Ahirio suddenly noticed an old man with a white beard, in saintly clothes, riding on Pala fish and moving against the tide. He proclaimed at the top of his voice that Kwaja Khizr (Lord Khizr) swam the Sindhu upstream and rested on an island near Rohri (a city on the banks).

Ahirio then had a vision and he saw Uderolal riding on a horse, a flag in one hand and a sword in the other. He also saw endless troops of warriors following Udero. Ahirio prayed for a one-to-one meeting, to Lord Jhulelal. Thereupon the troops vanished. Uderolal taught Mirkshah, “Whatever you see is the creation of One, the God. There is but one God, whom you call “Allah” and Hindus identify as “Ishwar”. All beings are created out of Him”. Maulvis urged Mirkshah to arrest Udero, to not to miss this opportunity as Udero was alone. Although Mirkshah was hesitant, he nevertheless ordered the arrest of Udero. As the officials of his court moved to arrest Udero, the entire court was inundated with water. Simultaneously fire broke out. The whole palace became a towering inferno. There was no escape. Uderolal spoke again, “Mirkshah, your God and mine are not two different ones but One. Had the Almighty so desired, He could have ordained Hindus to be born Muslims. But no, God wanted Unity in diversity. All the world is but His manifestation”.

Mirkshah beseeched tearfully, “My Lord, I realise the truth now. Save me from this ravage.” The fire was blown out and the waters too receded. Uderolal pronounced, “Worship of God is to be done in its blended form of Jyoti (flame) and Jal (water). Let every human being worship the Almighty with whatever name he desires. Let there be bonds of brotherhood.” Mirkshah gave up his divisive vision and started treating everyone equally. Uderolal then asked Hindus to go home and attend to their routine work. He also asked them to build a temple, to commemorate the unusual transformation of Mirkshah. Light one candle in the temple and water should be available for Daat (holy sip). He taught people to remember God at all times in and through every activity. God alone is real, the rest a mere passing phenomenon.
Uderolal had two brothers, Sonaram and Bhedoram. Both did not believe in the path Udero was revealing. Udero tried to counsel and convince them about the importance of spirituality in life, but in vain. They were not chosen for inheritance and spent the rest of their life in grief and sorrow. Udero chose his cousin Pagad and appointed him as Thakur, priest of his religious group. Pagad followed Uderolal and built Udero-ghat on the river near Zinda Pir, near the place where Udero had swum against the stream. They both travelled extensively. The Uderolal temple under the control of Mirkshah had now become very famous and both Hindus and Muslims prayed there regularly. A ‘Lal Saain Mandir’ was also built at Manoharo near Karachi.

Uderolal presented seven symbolic objects to Pagad. These form the essential symbols of Daryahi-Panth. (Worshippers of the water-God). Vero (ring), Light (ever-burning earthen candle), Kantha or Prakhar (a shawl like cover that acts like a shield), Deg (a big cooking vessel), Tegh (sword), Dhokla (Damaru or a small drum played on both sides using one hand), Jhari or Kalash (a pitcher).

Sant Pagad built a temple and placed these seven symbols in it. Uderolal taught Pagad that every evening after “Panjra” i.e. singing five-liners in praise of river-God, a ceremony called “Palav” should be performed. It involves the devotee stretching any piece of cloth, shawl, an empty bag as a receptacle in front of oneself to seek from God the good and welfare of all. The prayer invokes water-God for its benignity. Water flows down from the north and turns earth green, provides vegetation. Our Sanwal Shah (a reference to Lord Krishna, who is dark) also bestows the same benediction on humanity.

Hindu-Sindhis celebrate their new year as the birthday of Jhulelal by taking out a procession called Bahiraana-Saahib. Bahiraana-Saahib, the symbolic worship of Uderolal entails the following. 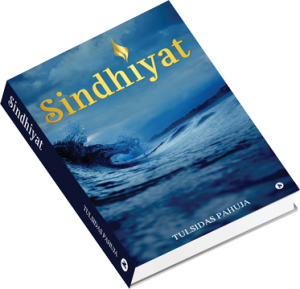 Sindhiyat is a route map. Directing its reader towards Peace and prosperity.